Good news from the ponds

Marie has been working with Senan Gardiner, IWT's former Education Officer, getting 2 schools to create wildlife ponds. On Friday, they went to St Ursulas School and below is a photo with pupils from Ms Twomey's Class depositing frogspawn ( from Marie's pond) into their school pond. This group of girls have an impressive knowledge of wildlife, showed us several projects of birds  they carried out  counts in the school yard. Last year we had visited the pond and planted some natives such as bogbean and flag iris. The resident goldfish were re-homed among pupils, leaving a new home for the frogspawn. 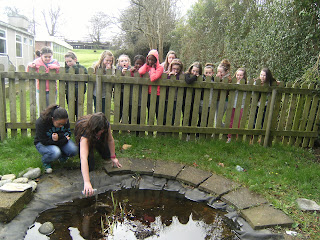 They also went to St Saviours NS, where a newly-dug pond (by local IWT volunteers, Leighton and John) has had a few teething problems. They visited 6 classes with the frogspawn, and addressed concerns of some teachers about safety around the pond. By the time they left, both teachers and pupils want the pond, and the frogs!!
Posted by Andrew Cox at 10:57 PM No comments:

The IWT welcome the Garda investigation into the shooting of seals off the Waterford Coast last week, and encourage members of the public to report any information they may have to Tramore Gardai (051 391620).
IWT are concerned that the 4 injured seals appear to have been shot close together at sea, in a deliberate act. All stranded close to each other in the same area of a 3 mile long beach, within days of each other, and had to be euthenased as they were in a badly injured state.
Seals are a protected species under the Wildlife Act, and play an important role in the marine food chain and their reduction may lead to negative consequences for ecosystem balance.
We believe that this type of animal persecution has a very negative impact on the country's image as a visitor destination, and it's reporting on BBC news last week sends out all the wrong signals from a nation which is appreciated by Britons and other for its natural environment.
There has been speculation about the perpetrators of this wanton and cruel act and we would ask all interested organisations to declare their condemnation of it. 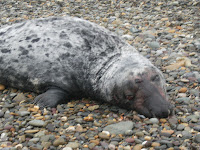 Some pictures provided by Marie 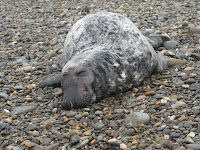 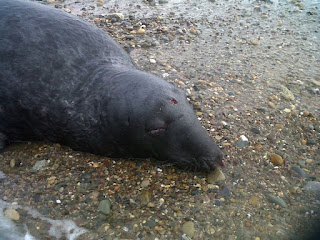 The IWT deplores the wanton destruction of our wildlife following confirmed reports that two grey seals had been shot in the head near Tramore, Co. Waterford sometime on Tuesday February 21st. These animals suffered a horrible death having swam ashore with awful head injuries. They were later euthanized under veterinary supervision. Aside from the terrible cruelty of this act our seals are protected by law under the Wildlife Act 1976 (as Amended 2000). They are also protected under Annex II and IV of the European Habitats Directive.
The IWT is now calling for a full investigation by the National Parks and Wildlife Service and the Gardaí into this illegal act. Those responsible must be brought before the courts to demonstrate that the law will be upheld and such barbaric acts will not be tolerated.
IWT chairman Pádraic Fogarty says “too often in this country we see no regard for wildlife law. Whether it’s the poisoning of eagles or the destruction of important habitats there seems to be a reluctance by the relevant authorities to bring those responsible to justice. What does this say about our attitude to our natural heritage?” 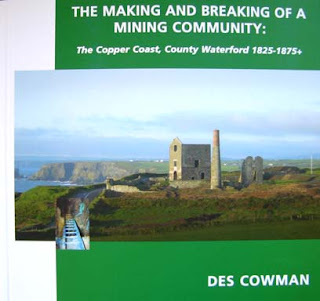 The Waterford branch of the Irish Wildlife Trust will host a walk along a section of the Copper Coast at Bunmahon on February 12th. The leader will be Des Cowman who talk about local geology and wildlife. Meet at the main carpark at Bunmahon at 2 p.m. The walk will last 2 hours and will head to Tra na mBo.

Please note that views expressed on this page may not reflect the views of the Waterford Branch of the IWT. Every effort is made to ensure as accurate a representation as possible.